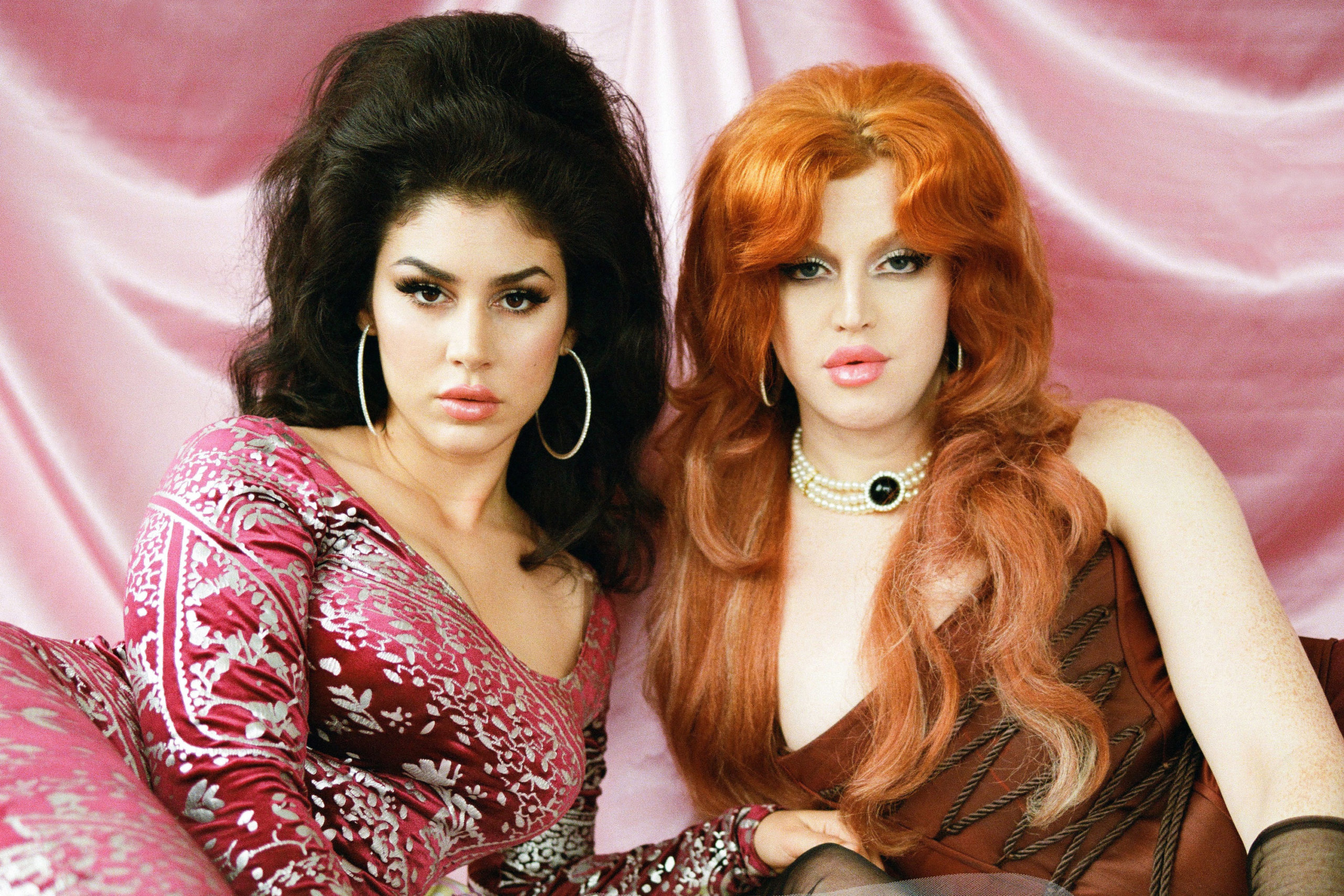 We’re obsessed with the queer couple behind this season’s dreamiest disco dance tunes.

When Queen Sateen and Exquisite first hit the underground New York scene, they joked that they were just a “normal, hetero married couple.” As two gender bending drag stars in a relationship, they just assumed we’d all get the joke. Instead, “people really clung to the idea, especially of Exquisite being a ‘straight drag queen,’ and sensationalized her and our relationship,” Queen Sateen tells me. “When she finally had the courage to be honest about who she is, it was a real battle to dispel the idea that she is the ‘husband’ and that together we are a heterosexual couple.”

Today, Exquisite is living her truth as a trans woman, while Miss Queen identifies as a pansexual cisgender female. “We are 100% still a couple, very much in love, just now we consider ourselves in a lesbian, not hetero, relationship,” she says.

And while sexuality isn’t relevant to being appreciated as artists, Sateen have no qualms about being loud and proud about who they are—in fact, it’s at the core of what they’re all about. The duo’s first self-titled EP is full of tracks about “independent, strong-willed queer femmes.” It’s Lady Miss Kier (diva disco house) meets early RuPaul (hella inspirational and upbeat), and if that doesn’t sound heavenly enough, read our interview with Sateen below.

How did you guys meet?
We actually met through OKCupid, but it wasn’t to date. We were both looking to start a music project, so Miss Queen put in her profile, “DO NOT MESSAGE ME IF YOU WANT TO DATE!” We exchanged messages and immediately embarked upon our musical collaboration. At first, our meetings were platonic music practices, but we started spending more and more time together. It became clear that there was romantic chemistry between us, so eventually we couldn’t stop ourselves from hooking up. Thankfully, we did, because we got married just over a year after meeting and have never looked back!

And how/when did you start performing drag together?
Drag didn’t come until about a year after we started Sateen. We always tried to incorporate costumes, dancing and even makeup into our performances, but the idea of drag didn’t click for a while. We are both very influenced by John Waters and Divine, the B-52s, Rupaul and Deee-Lite. Those artists led us to the thought that maybe we should give it a try. But we were so naïve and we hadn’t really been to gay clubs or drag performances before. So our first drag performance as Sateen actually preceded any nightclub performance or experience he had. Needless to say, it didn’t go so well!  We obviously needed to do more homework than just watching Pink Flamingos, so we started exploring the NYC drag and nightlife scene. We fell in love with it and our drag phase was totally underway.

You’ve talked a lot about how you’ve felt within the LGBTQ community…
We always said we were a “normal, hetero married couple” as sort of a joke. We just assumed people understood that we considered ourselves queers, regardless of our sexualities or genders.  We worked in nightclubs and most of our friends were (and still are) LGBTQ+, so we were kind of naive as far as others’ perceptions of us. We have had to do a lot of damage control for our carelessness during the early stages of Sateen; but we don’t begrudge anybody for that. We accept this challenge and are proud to be loud and visible about being who we are.

How has your experience with drag informed your EP?
Drag was really our entryway into our queer identities, and this EP is all about queerness and how we relate to it. The EP has a pretty nostalgic sound to it, mostly referencing disco and house music. This vibe is so informed by the clubs that we have worked at as drag queens.  While a lot of dance music, especially today, can be removed from a queer context, we don’t take that connection for granted.  Just like how our look was informed by the footwork of actually going to clubs, turning looks and seeing what other people were wearing, so it is with our music. We hope that our music is imbued with an authenticity that comes from spending a lot of time working in clubs, hearing an amazing disco DJ like Honey Dijon or hearing our friends DJ, like the Carry Nation or Bearcat.

How do you feel about drag becoming so popular in the last few years?
It is definitely a good thing that drag is becoming so ubiquitous. Drag is a really wonderful artistic outlet for anybody. But more so, it is such a transgressive art form, because we all take our gender identities for granted, especially cis people. Simply by playing with fashion and makeup, we are able to free ourselves from so much conditioned thinking about our identities. And simply by throwing on a wig and some lashes!  It is so much fun, too! That’s why it is so appealing. Because even the most repressed person can’t help but laugh at a hilarious queen with some ridiculous overdrawn lips and a bouffant wig.

Does your music have a message? Do you think it’s important for music to have a message especially within the current political climate?
If there is a theme that flows consistently through all of our songs, it is that every song has a specific message. Sometimes what we are discussing is more broad and vague and the listener can ascribe their own meaning and experiences to what they are hearing, and sometimes it is more specific and diaristic. We think too many people make music that perpetuates negative stereotypes, misogyny, and violence. We feel like as musicians, we need to take responsibility for what we say and not add to that noise. We try to keep it positive. Some of the themes we explore are about self-love, opening your mind, queer love, and self-empowerment.

Your style is off the hook… is that all wrapped into music and your performance? Or is fashion something separate?
We consider the aesthetic element of what we do to be just as important as the music. Whether it is in photographs or in our music videos, we always present ourselves in a high-femme high-glam way. We are artists and music is our main medium, but the atmosphere we create around our music is just as important as the music itself.

How do you both decide on your performance lewks?
We find all of our clothing at thrift stores around the city. We look for pieces that are glamorous, colorful, and sparkly (and it doesn’t hurt if it is designer). Usually we have a theme that ties our look together, sometimes it is a color and sometimes it is a print. The most important thing is for both of us to feel sexy and confident in whatever we are wearing! 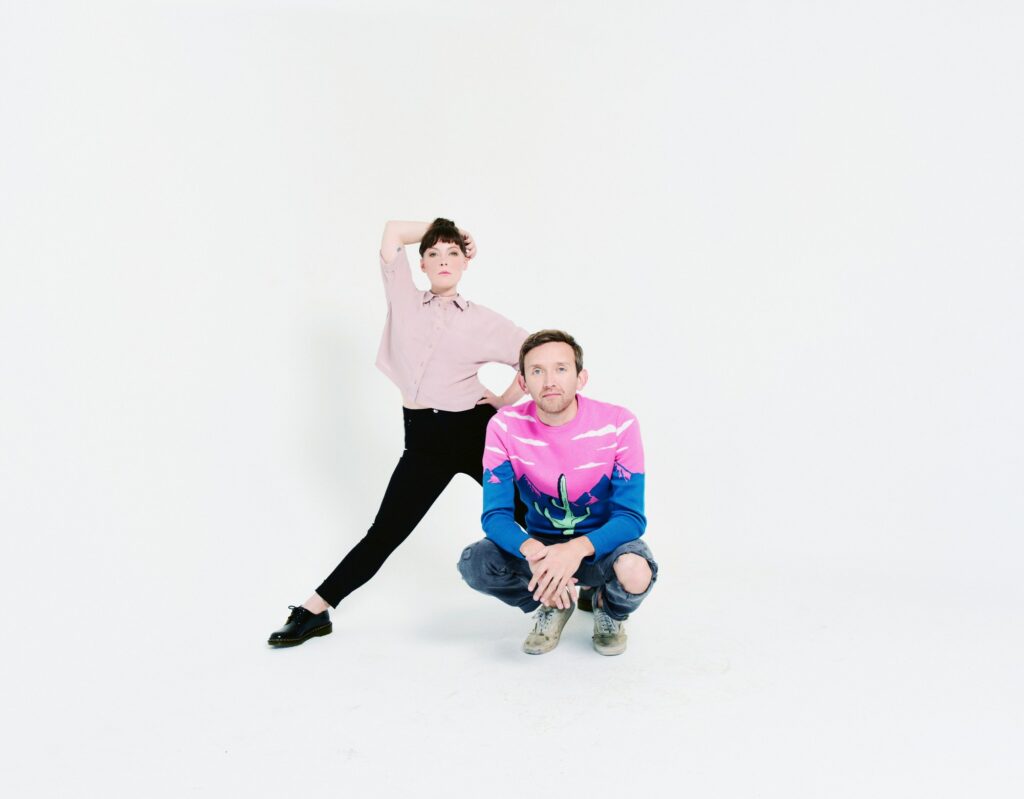