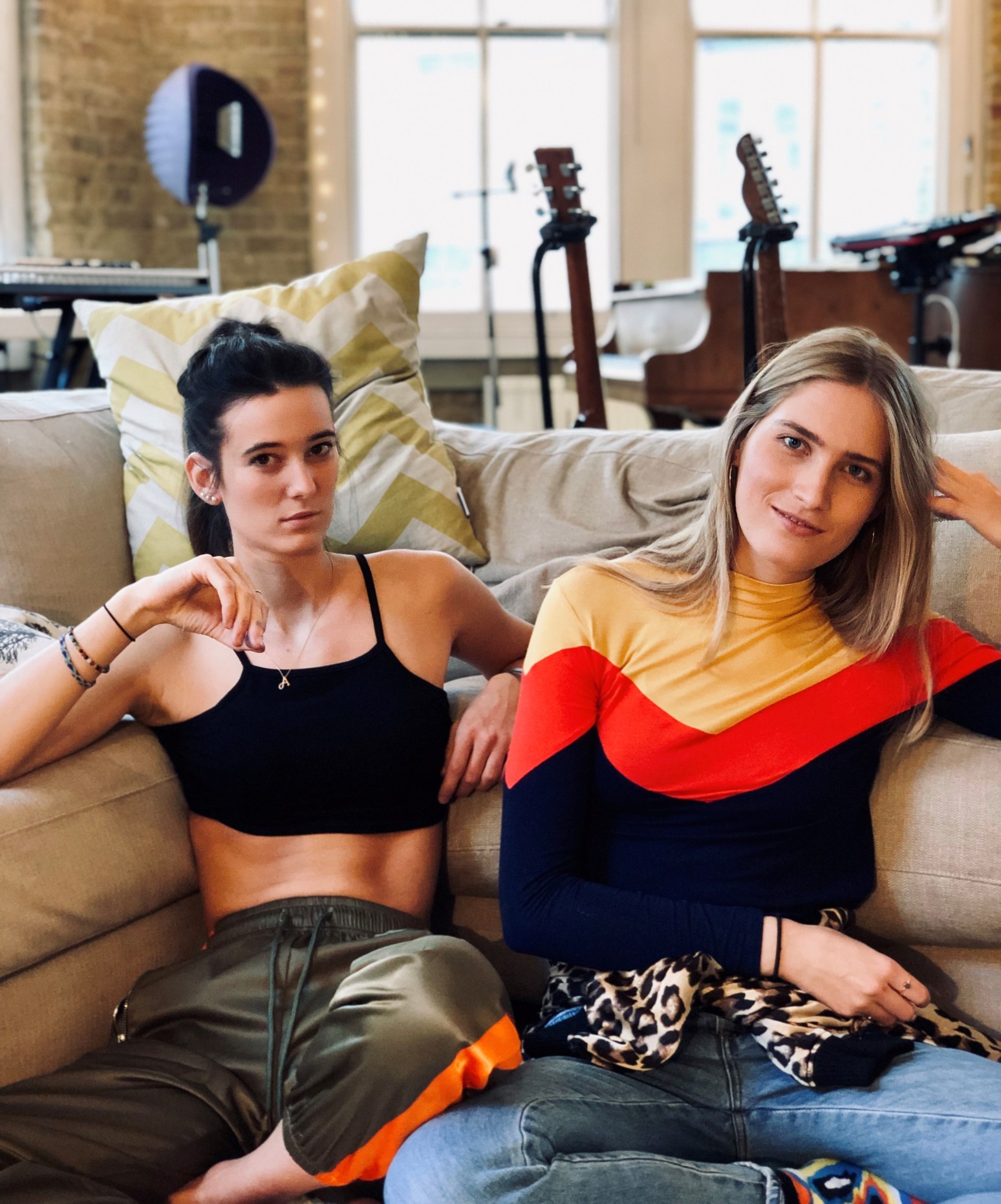 Stripe It Out Joggers, When Push Comes to Chevron Top

Meet HANNIE- your new fave musical duo and next go-to for that Instagram binge sesh. This funky, electro-pop, uber talented tag-team is made up of German born Hannah Koppenburg and Guildford girl, Annie Wagstaff (no prizes for guessing how they came up with their collective name). Meeting at university, the girls instantly hit it off over their love for music and wavy jam sessions, became BFF’s, and moved to London together to pursue their music careers. Going down a storm on IG with a fusion of their laid back, street style and musical moments, HANNIE are now taking a break from their successful run of playing for other artists to focus on creating LOTS of new music for us in 2019 (yay). We catch up with them to pick their brains on the secrets behind their success, their plans for 2019, and what v. cool musicians drink at the bar.

Hi guys! Tell us a bit about yourselves..

H: I’m Hannah and I’m originally from Germany. I came over to Britain 4 years ago, just by chance, and then I met Annie and we became best friends. I stayed here in England and I started doing music.

A: I’m Annie I’m from Surrey, England, from a place called Guilford. I met Hannah at Uni. Then we moved to London together about two years ago, and started writing songs and music together.

How did HANNIE come into being?

A: At uni we were just playing a lot together, but we hadn’t started a band or anything, and when we moved to London we were both sessioning, so playing our instruments for other artists, which is cool because that was literally what we wanted to do. Then we put up a few videos of us playing together on Instagram and people just seemed too really like it and it got a lot of shares, and it just all went a bit crazy. People were like ‘when are you guys going on tour!?’, so then we were like oh damn, I think we need to make this a bigger project and that is literally what we’re doing now.

H: We hadn’t even written a single song then, so we were like oh before we go on tour we need to like write some songs hahaha. 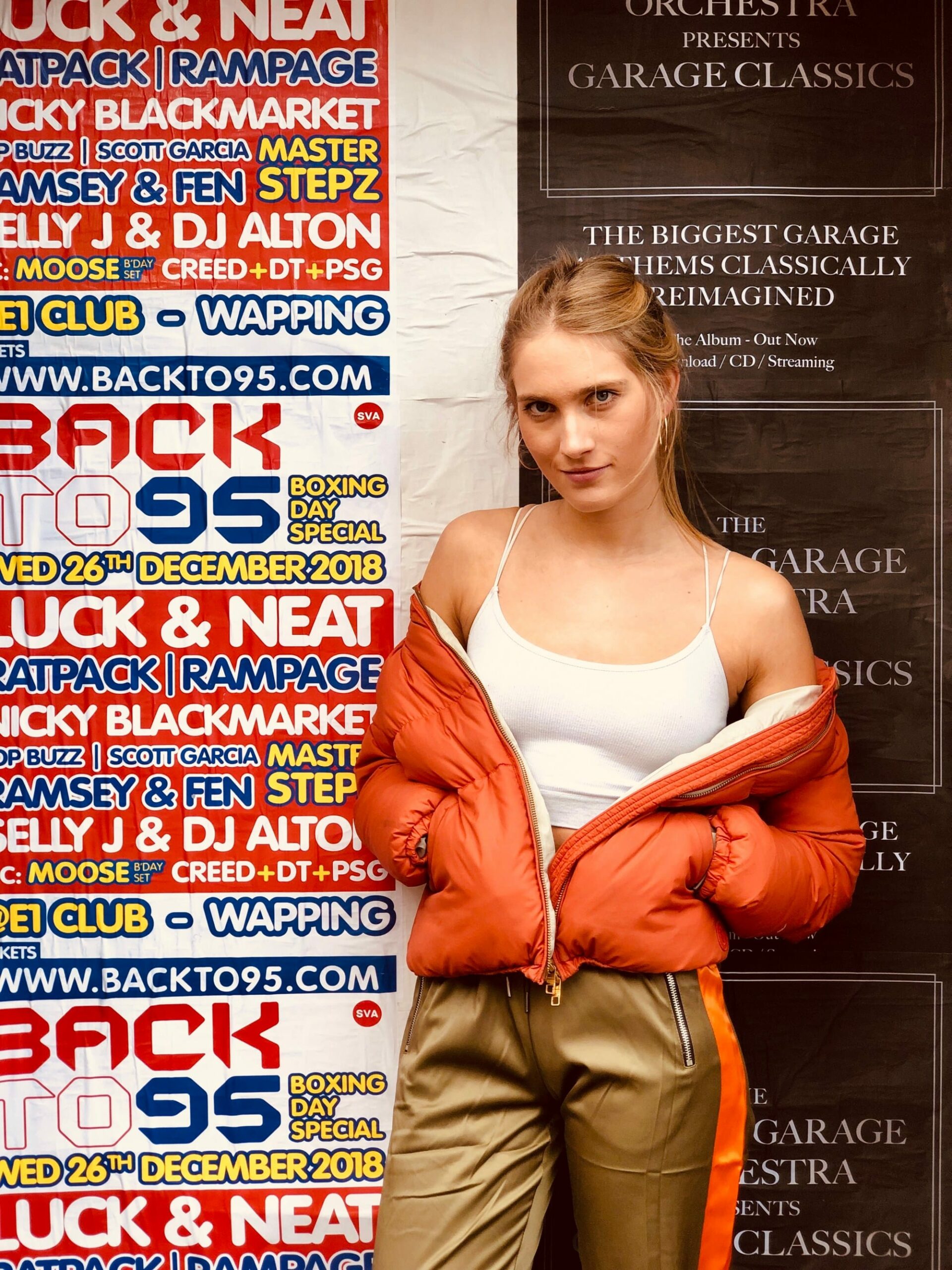 Whatever It Snakes Flare Pants, Layer it On Padded Coat

How would you describe your music for people who haven’t heard it yet?

H: Funky though. A Neil Rodgers vibes. A lot of people compare us to Daft Punk as well.

Who are your biggest musical inspirations?

A: It’s so hard for me to choose because it depends on like, what. So for my playing it would be Neil Rodgers and some jazz people, but then for like the music we like to make it would be people like Mø, DNCE, and Maroon 5.

I love all your Instagram videos of you guys jamming with other artists. You guys always look like you’re having so much fun- what’s your favorite track to play?

A: Well, we’ve never done the same one twice. We do a different on every time but I’d say the favorite one we’ve done is one called ‘Models’.

H: Ugh, I don’t even know, it’s more of an in-the-moment thing, we just start jamming off the speed or a riff or something, then we start building up on it, and then we just do it immediately, then the next day we come up with something new and were like wow this is the best thing we’ve ever done hahaha and it just like repeats.

Your musical style is really unique, what’s the best advice would you give to other musicians working and refining their on their own sound?

A: I think you’ve just got to do what you genuinely love and don’t get taken away or swayed with what might do well, or is doing well, or what other people tell you to do. You just gotta do what you love, because even if you do something where someone’s been like ‘oh do this’, and it goes really well then you’re really doing something that you’re not 100 percent passionate about. 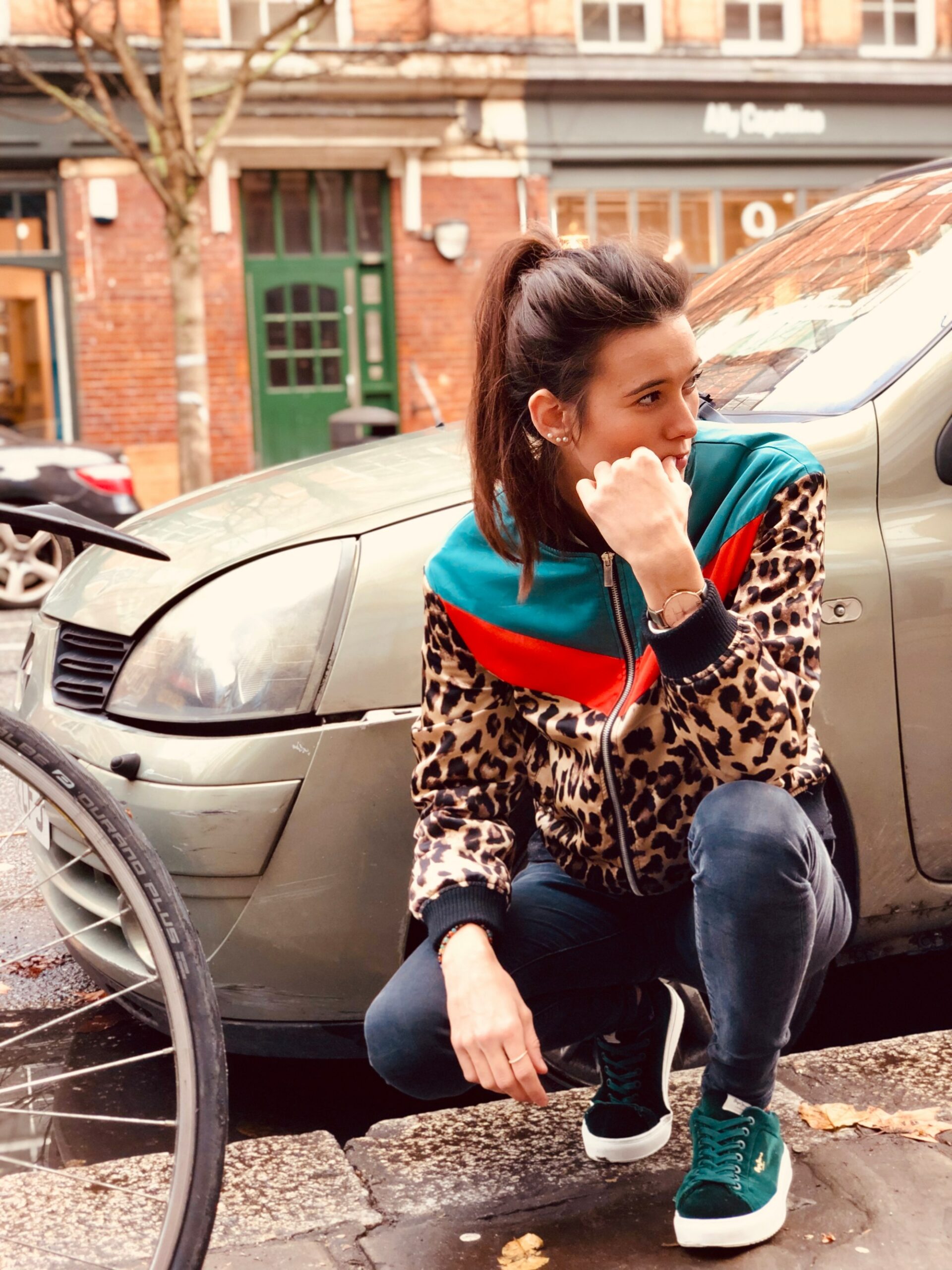 You guys are a massive success on Instagram, you have a really good mix of music and style on there. How would you describe each of your particular styles?

A: Every day I’ll just wake up and think ooo I fancy being really casual today, and just throw on a tracksuit and a vest top, then some days I wake up and feel sporty; so I don’t know that I have a distinctive style.

H: I think generally pretty chilled, and sort of street wear-ish. Nothing to fancy.

A: You’ll rarely catch us in a dress.

A: We’ve spent the majority of the year writing songs which has been amazing. And we’ve got some really good songs from it, which were going to release next year so I think that’s my highlight.

A: And we wrote some really great songs which were like yeah, can’t wait to put this out.

H: It’s actually the writing process which is the highlight because by the time you’ve put it out, you’ve heard it so many times and you’re a little bit over it, but the moment when you’re in the studio and you’re writing it you’re like yeah this is great. They’re amazing moments.

Have you guys got anything excited planned for 2019 or any goals you’d like to accomplish?

H: One hundred percent! We’ve definitely plan on putting out a lot more music next year, and we’re hoping to go on tour around the UK, maybe around Europe, and play more festivals maybe. And write more— that’s our main goal, more music. 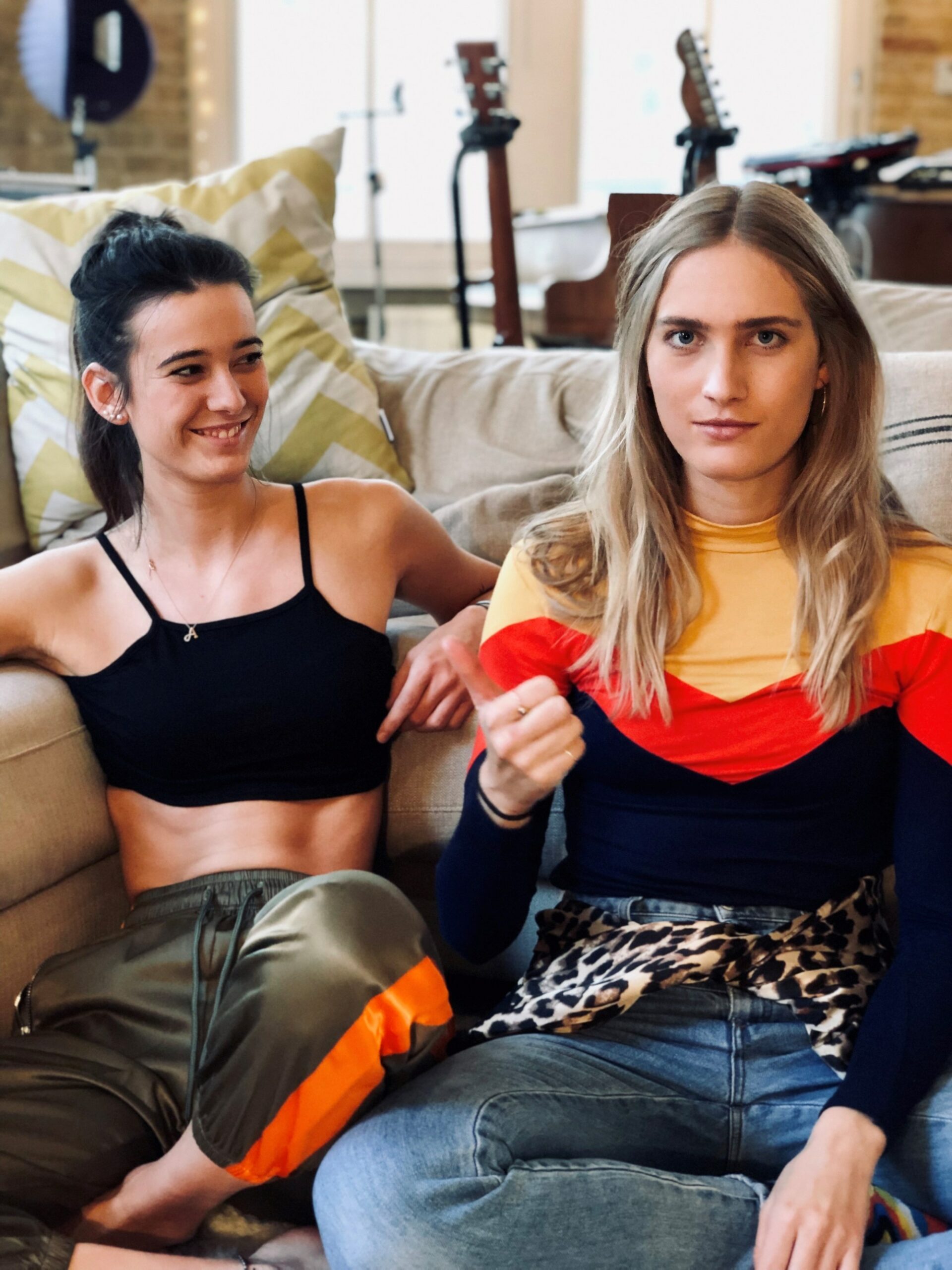 What are your favorite things to do in LDN?

A: Ooo good question! There’s always loads of pop ups, and I like to check out all the different ones and going for food hahaha.

H: Hahaha Annie loves food. I love it when I have to go somewhere and I get to cycle around and get really, really lost on my bike and find some cool new spots around London I’ve never been to before, because you always find something new and that’s pretty awesome.

A: I have different drinks for different occasions. So if it’s sunny, Pina Colda, if it’s cold, a Bloody Mary. Any other time, honestly as boring as this sounds, all I want is a water hahaha.

H: I’d say probably Espresso Martinis and then when I’m out I probably just have a gin and tonic.

Yeah! G&T’s are the way forward. No Hangover on those!

A: I always think don’t tell people what you’re going to do before it’s done. Because then you look like a bit of muppet if it doesn’t happen.

H: The law of attraction is a really big one for me. If you know that you’re going to achieve something and know you’ll get there, then you will, and everything will merge in front of you but you have to know it.

Where’s the best place to keep update with all your HANNIE happenings?

H: It’s Instagram, but all of music is on Spotify. And you know what, our website. I put so much work into that hahaha. It has all of our music, our merch, and all of our updates on there.

Catch all of HANNIE’s musical happenings on their Insta or website. 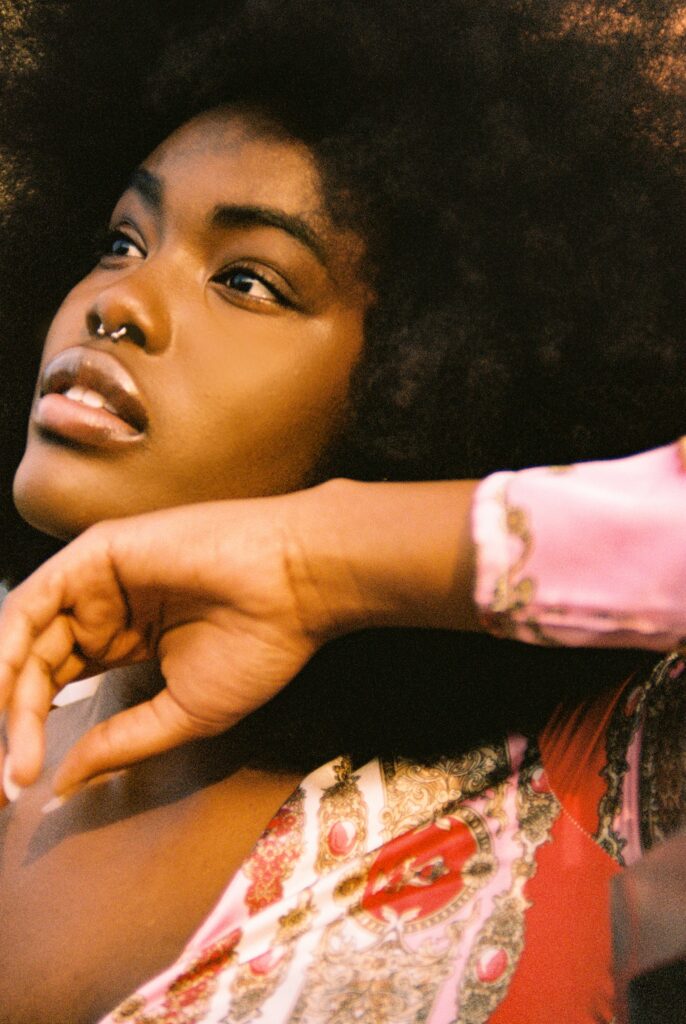 Meet Tanerélle, The LA Siren You Need to Know 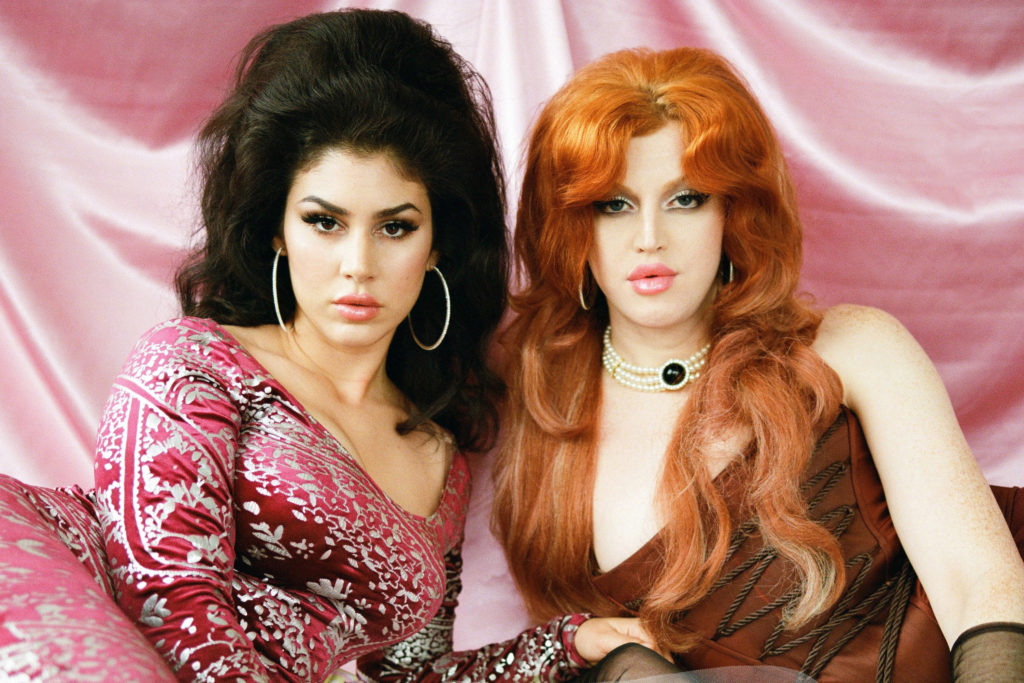