We’ve got the exclusive on her brand new video, plus everything else you need to know. We’ve got the exclusive on her brand new video, plus everything else you need to know.

There’s an art to turning a negative experience into a positive situation, let alone a catalyst for purpose, and it’s safe to say that Roxiny has it mastered. After the Dominican dark pop artist came out of a nine-month-long abusive relationship, she wrote the song “9 Months,” which just so happened to mark her spiritual rebirth. Following in the footsteps of her grandmother, a revolutionary who fought in the resistance against Dominican dictator Rafael Trujillo, Roxiny propelled herself into a position of influence, using music as a platform for change. Not only is she positioning the indelible single and gripping new video for it, which we’re premiering below, as a tool to empower women, but she’s also leading her own resistance, launching a campaign to raise awareness about violence against women and working with GEMS, a non-profit that helps women who have been involved in sex trafficking. Basically, when life handed her a bag full of lemons, she made lemon meringue freakin’ pie, and the result is sweet, sweet liberation. Roxiny opened up to us about finding catharsis through writing, making a music video that women can relate to, and discovering that Nas is a true fan.

What was your childhood like? How did you get into singing?

I spent most of my early childhood in a small town in Andalusia, Spain, and we traveled a lot, thanks to my parents’ wanderlust. I got to experience so many different cultures as a little girl. I looked nothing like the people in most of my surroundings. I was a mixed-race child with features nobody could really place. That was both a challenge and tremendously powerful once I owned all the unique and strange things that made me who I am. Singing was my one constant and my first form of creative expression. I must have transitioned right from crying into singing, because I can’t remember anything before it.

Given that “9 Months” is about overcoming an abusive ex, you must have had an intense and difficult time writing it. How do you begin to work through something like that?

It definitely took a long time get to a place where I felt ready to write about it, but once I got there, the song came gushing out. Leaving a relationship is never a clean cut—there’s always heartache and residue. When you’re breaking ties with a toxic or manipulative one, the mess is compounded. You’re left with so many questions and self-doubt, and [faced with] rebuilding and re-asserting. It took some time to understand what I had experienced, when all along I felt like I should have known better. These things take time, and I needed to honor that. I needed to own the experience if I was going to learn anything from it.

The video for “9 Months” is really powerful. What were your goals when setting out to make it?

First off, thank you so much. I worked very closely with the director, Fernando Rodriguez Morales, to visually evoke what that experience felt like. I wanted it to be raw and honest, much like the song. We shot it in my bedroom, which is my most personal space. I casted nine girls from different cultures and walks of life to show that this can happen to any one of us. Love and intimacy is about trust, and trust, as beautiful as it is, also makes us vulnerable. The video is a visual metaphor for my story, her story—that story that most of us know in some capacity. I’ve learned that through [working on] “9 Months.”

You’ve spoken about this really interesting comparison between coming out of your nine-month-long relationship and feeling reborn. How has this experience shaped your perspective on your career?

That relationship challenged me. I had to find ways to protect and shield my self-esteem from his attacks. I created a womb for myself in many ways. It also lasted exactly nine months, and for those nine months I hit a creative wall. When I walked away, it felt like some form of rebirth, because I knew then that I would never again compromise my truth for anything or anyone. In a strange way, through that relationship and a series of other unrelated life experiences, I found the courage to be unabashedly me. I became fearless—personally and creatively.

You’re an activist just as much as you are a musician. Can you talk about your work with the non-profit, GEMS (Girls Education Mentoring Services), an organization dedicated to empowering young women involved in sex trafficking?

I began volunteering with GEMS a little over two years ago. I did a lot of research before working with them. What differentiated GEMS from other organizations I looked into is that they don’t try to shame anyone with their philosophy. It’s a place of acceptance, growth, positive reinforcement, and empowerment. I teach a songwriting workshop to mostly teenage girls who have been sexually exploited in hopes of sharing with them the same tools that help me work through my own experiences. I’m there to teach, but I’ve learned so much from them too.

What do you think is the most common misconception about people who are victims of abusive relationships?

That they are weak. Yes, we may be temporarily weakened by our experiences, but I actually think it’s the abusers who weave in and out of these relationships weak and broken. Evolved, happy, confident people don’t prey on others. Once you’re aware of that, it’s easier to find your strength again. I’ve never seen myself as a victim. I got in the ring, and I lost a few rounds, but in the end, I grew from the experience. I learned, so I won.

“I’ve never seen myself as a victim. I got in the ring, and I lost a few rounds, but in the end, I grew from the experience. I learned, so I won.”

You launched the #9MonthsGirlsRising campaign this summer to raise awareness about violence against women and are donating all of the proceeds from the single and your merch bundle to a new organization that empowers women each month. You’re also asking women to post what makes them rise on Instagram. What has the response been so far?

So far the support has been amazing! We launched the campaign with a live show and fundraiser for Planned Parenthood in the ring at Overthrow Boxing in NYC a little over a month ago and had so many friends and fans come through to support. I’m performing at an event sponsored by UN Women for Gender Equality in early December during the 16 days of activism following the International Day for the Elimination of Violence Against Women. There’s a lot revolving around the #9MonthsGirlsRising campaign, which culminates on March 8th, 2018. This month we’re supporting Casa de Esperanza in honor of Hispanic Heritage Month.

Dominican history and culture are very obvious influences in the works of one of my favorite authors, Junot Diaz (A Brief Wondrous Life of Oscar Wao is my favorite book). I know that your grandmother fought in the resistance against Rafael Trujillo. Do you find your background influences your work and activism?

I still haven’t read Junot Diaz’s A Brief Wondrous Life of Oscar Wao, but it’s on my list. My grandmother helped disseminate information for the anti-Trujillo movement. This was punishable by torture or death, as were most acts against Trujillo. I like to think I got my spirit from her. She has never tolerated injustice. My mother also taught me a lot about giving back through her own humanitarian work. I come from a line of very strong, intuitive, powerful women who most definitely inspire me.

I read that you go back home to Spain or the Dominican Republic before you’re about to release something, and that it helps you get back in touch with yourself emotionally. How have these trips changed for you over the years (if at all)?

Home always grounds me. Even when the places change, nothing really changes about the effect home has on me—it just takes me back to my childhood. My father always wanted me to experience the world and try new things, and he encouraged me to be open-minded and creative. My parents are fearless. My mother always followed her own instincts. For example, when I was little, gypsies in Spain were seen as thieves and criminals to many people, but my mother would invite the town matriarch into our home without any fear whatsoever, ignoring everyone’s warnings. She taught me to give people a chance and not to be so quick to judge based on bullshit stereotypes. So I guess all these lessons I learned as a kid have stuck with me, and returning to my foundation before any big shift takes place in my life is always healing.

It sounds like creating and putting out this work has been a really cathartic experience for you. Where do you hope to go from here?

It has been. I’m back in the studio now, working on two more songs with my friend and producer Jonathan Kreinik, who produced “9 Months.” I’m looking forward to more writing sessions with Chris Coady too. I have a few more singles to go before we release my EP, Rituals. Every one of them is personal. “Goliath” I wrote for my partner in life, love, and crime. He’s my muse and subject of the few love songs I’ve ever written. With the release of Rituals in March, I’m also looking forward to touring much more, traveling, and being in the company of and collaborating with many more artists I respect—Bjork, Karen O, Mitski and Karen Dreijer Andersson are on my wish list. I just had Nas tell me he thinks “9 Months” is fire. That’s one for the books. Honestly, I just want to keep creating and performing till I run out of breath.

Roxiny’s EP, Rituals, comes out next May. 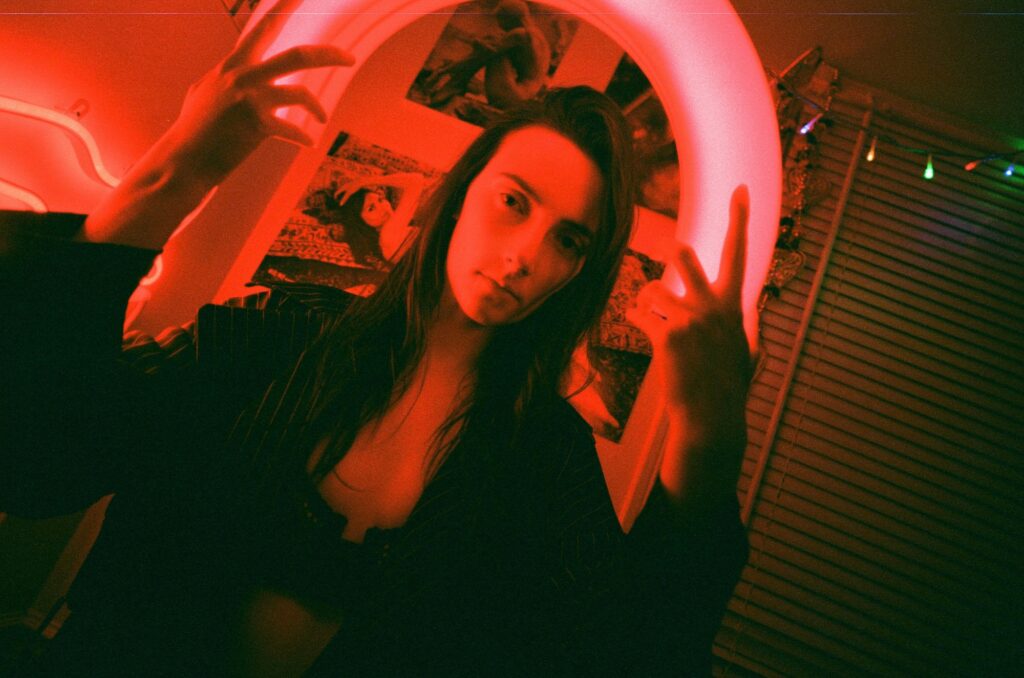 So Below’s Guide to Goth-Pop The Skins Might Just Be the Future of Music