She’s All That: Meet Maria Alia 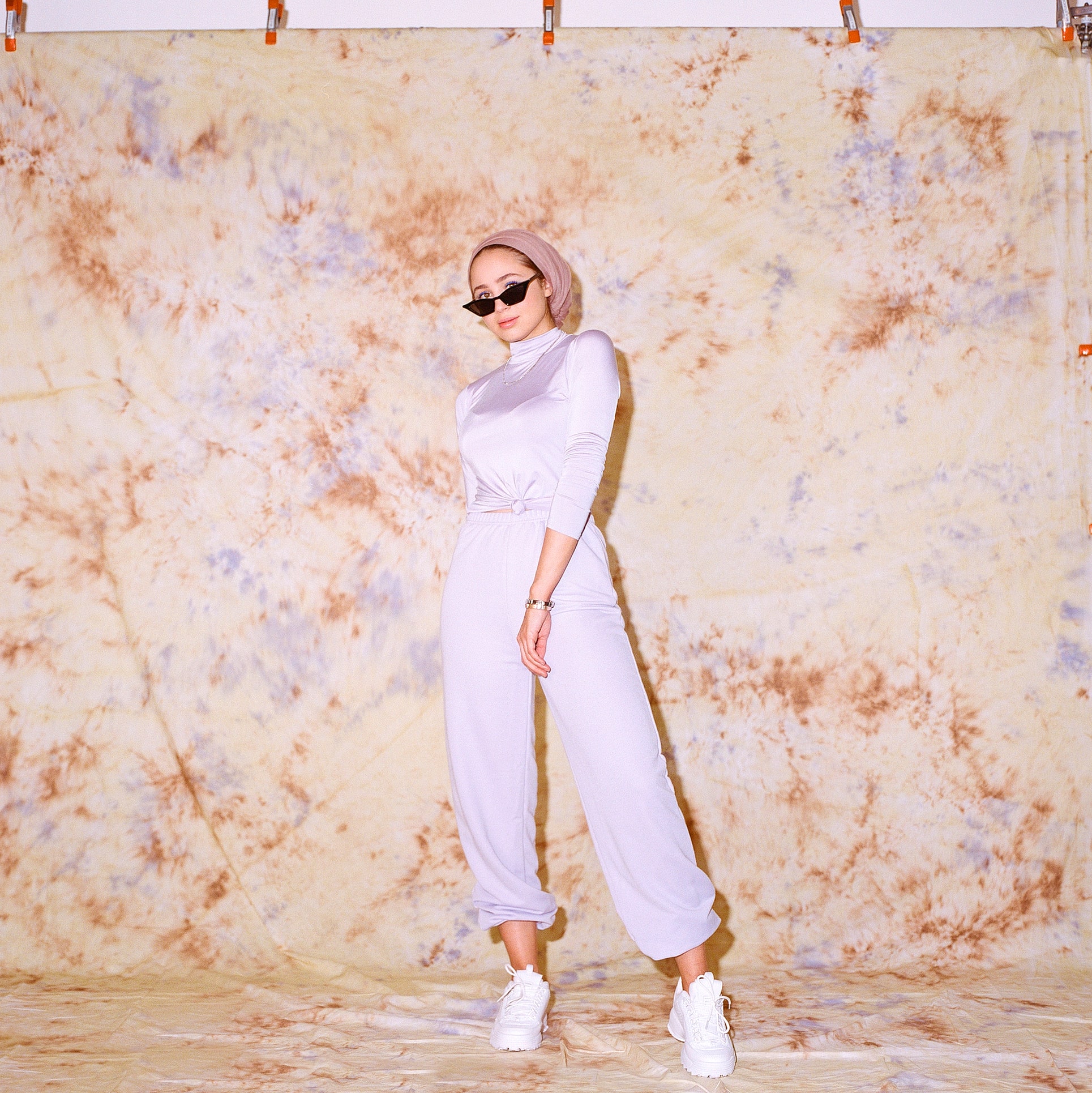 Up to My Neck Turtleneck Top, Don’t Sweat It Joggers

Maria Alia is one of those shining humans who can enforce change, break barriers, and shatter stereotypes just by being her damn self. As a half Arab, half Puerto Rican Muslim kid growing up in Alabama, Maria started exploring her love of fashion early on, merging her impeccable, minimalist taste with her rich culture and beliefs–and shared in on Instagram. “Arab culture is very modest, even if you’re not religious,” she says. “And I chose to wear the hijab when I was in high school.” After a few where’d-you-get-thats slid into her DM, it quickly clicked that she was on to so much more: creating a space for girls like her, who could learn to express themselves through style and gain confidence despite their lack of representation in the mainstream. And that’s some powerful stuff. We chatted to Maria about culture, empowerment through representation, being vocal and being present, and evolving her style.

Your style mission is so fucking awesome and important, and your MO is to blend really great style with modesty. How has your culture and background informed that, and how did you see a space for this?

I’m half Arab and half Puerto Rican, so I come from two very rich cultural backgrounds—I’m also Muslim. The whole modesty thing stems from being Muslim. Arab culture is also very modest, even if you’re not religious—It’s just the way we dress. I chose to wear the hijab when I was in high school. I was always interested in fashion, but I never saw modesty in mainstream fashion. There were no models, campaigns, or stores catering toward Muslim women. I didn’t see that as a hurdle, I just saw it as an opportunity to get creative and to not limit myself in my style just because I wear a hijab. Once I started my Instagram, I would post normal photos like everyone else. What I didn’t realize was that it was such a lucrative market, and an audience that was untapped. When girls started following me randomly and commenting, where did you get this, can you tell us how you shop and where you shop, I thought to myself, wow, this is really important. If I had this growing up, I would have been so inspired and I would have felt so much more confident in everything that I did style-wise. So I think it’s really important to show that you don’t have to limit yourself based on modesty or your religion or culture—you can still be stylish.

When young women see themselves represented in culture, it means a lot.

And it’s very empowering! I found so much empowerment through doing what I do. It was stuff I didn’t have when I was younger. And I see the other amazing modest bloggers, icons, and models out there and it’s so inspiring to me.

Let’s go back a little bit when it finally clicked—what kind of comments were you getting?

A lot of people were telling me that they felt inspired to wear a headscarf or that they always felt like they were held back because of it. It’s a struggle to follow your own cultural and religious beliefs especially in western countries where it’s not a common thing. You can get self-conscious that you’re not included. I would have girls tell me that this made them feel confident and that they wanted to experiment with their style. Those are the best comments I get. Whenever I get a comment like that, I feel like it’s all worth it. It’s really cool to see the evolution of this on social media. Now, there are so many girls who are of a religious background who are showcasing their individual style. We never had that before. 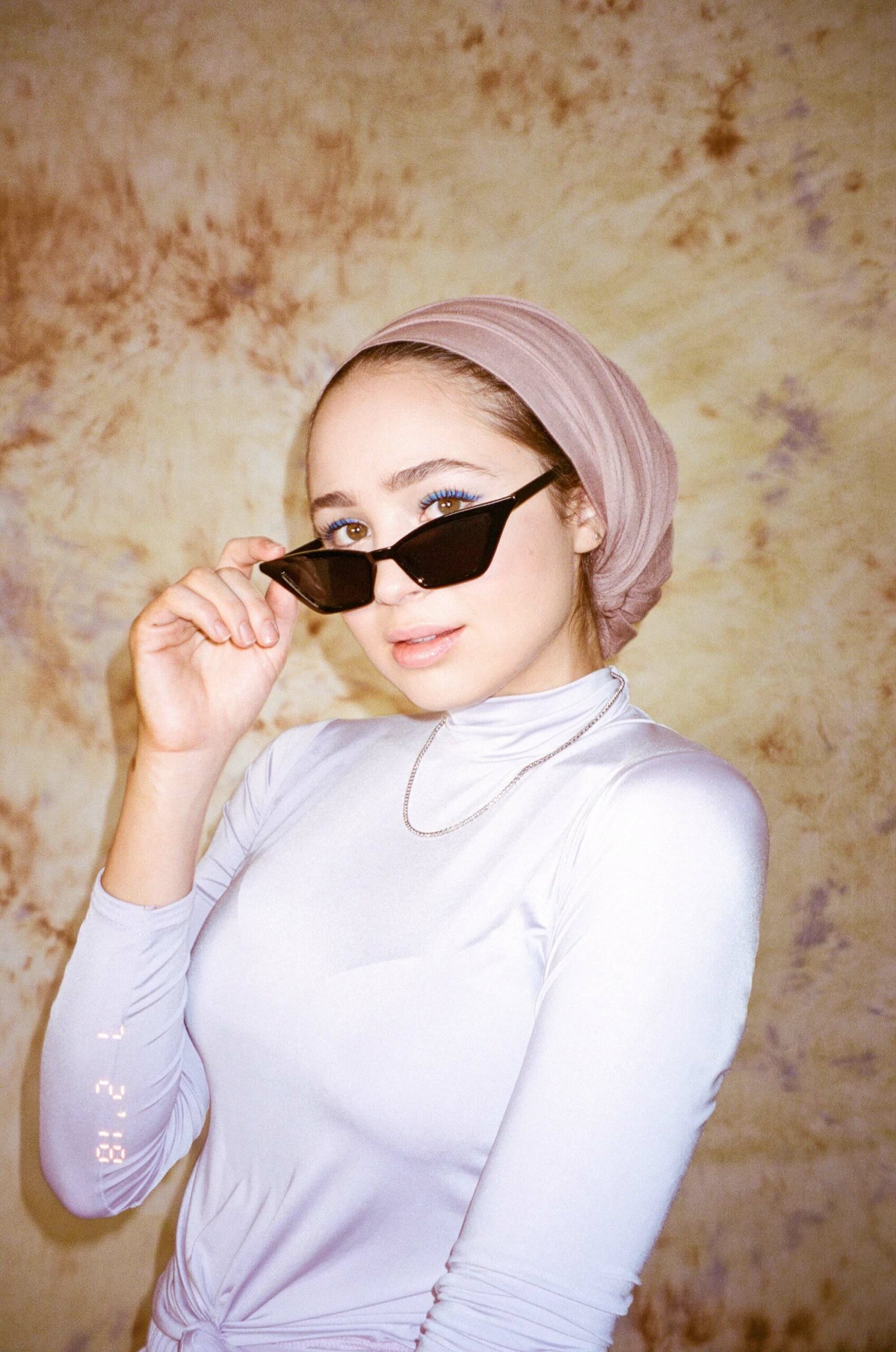 It’s crazy to me because Instagram is 6 years old now—that kind of thing didn’t happen. Do you feel like social media has democratized things to a certain extent?

Yes, without social media, I don’t think big brands would ever pay attention. We made it clear that we’re here and we do care about fashion. The industry definitely responded and it’s been really cool.

How important is it for women today to abandon stereotypes and see themselves in the media?

I think it’s extremely important. If you’re living within a stereotype, you’re not living an honest life. You’re doing what you think is expected of you. I think abandoning stereotypes definitely helped me. If I held onto the idea that a Muslim woman doesn’t belong in fashion or in front of the camera, then I wouldn’t be doing what I’m doing. So I think it’s important to find what you love and be your truest self.

How are you breaking down those stereotypes day to day?

One of the reasons why I love dressing the way I do is because there’s a negative stigma with Muslim women–people think we’re oppressed and forced to dress a certain way, which is the case in some people’s lives. But when it comes down to the actual root of it, that’s not how it’s supposed to be. It’s just an old patriarchal tradition that has trickled down. Just doing what I do as a Muslim woman breaks down so many stereotypes.

So you grew up in Alabama–that’s crazy, how was that?

I was born and raised in Alabama and I think I definitely changed a lot of people’s perspectives on people form the middle east. Obviously in NYC there’s more diversity and people are more open-minded.
Since I grew up there, it’s all I knew–I thought that’s how it was everywhere in America. Not that Alabama is such a horrible place. I didn’t have any extreme prejudice instances, just a lot of micro-aggressions and stereotyping, like people thinking I don’t speak english or asking “where are you from… but where are you really from?” But that type of stuff doesn’t really happen to me anymore now that I’m living in New York. Times are different.

We need to speak out and not go along with things just because it’s the way it’s always been done or because someone told you it’s normal. If you feel like something’s not right or if you feel like you deserve something that you’re not getting, speak out about it. Be vocal and be present. They can’t erase you if you’re there.

How has your style evolved over the years?

It’s definitely evolved quite a bit–if you go through my Instagram, you can see the whole evolution. I really like to choose pieces that aren’t ultra trendy. I still play with so many different trends but I try to pick pieces I think I’ll love in 5 years. My style has become more refined since I moved to New York. Growing up, I didn’t have inspiration on the streets. My inspiration came from TV and magazines. Now I see so many in-person things that make me inspired. 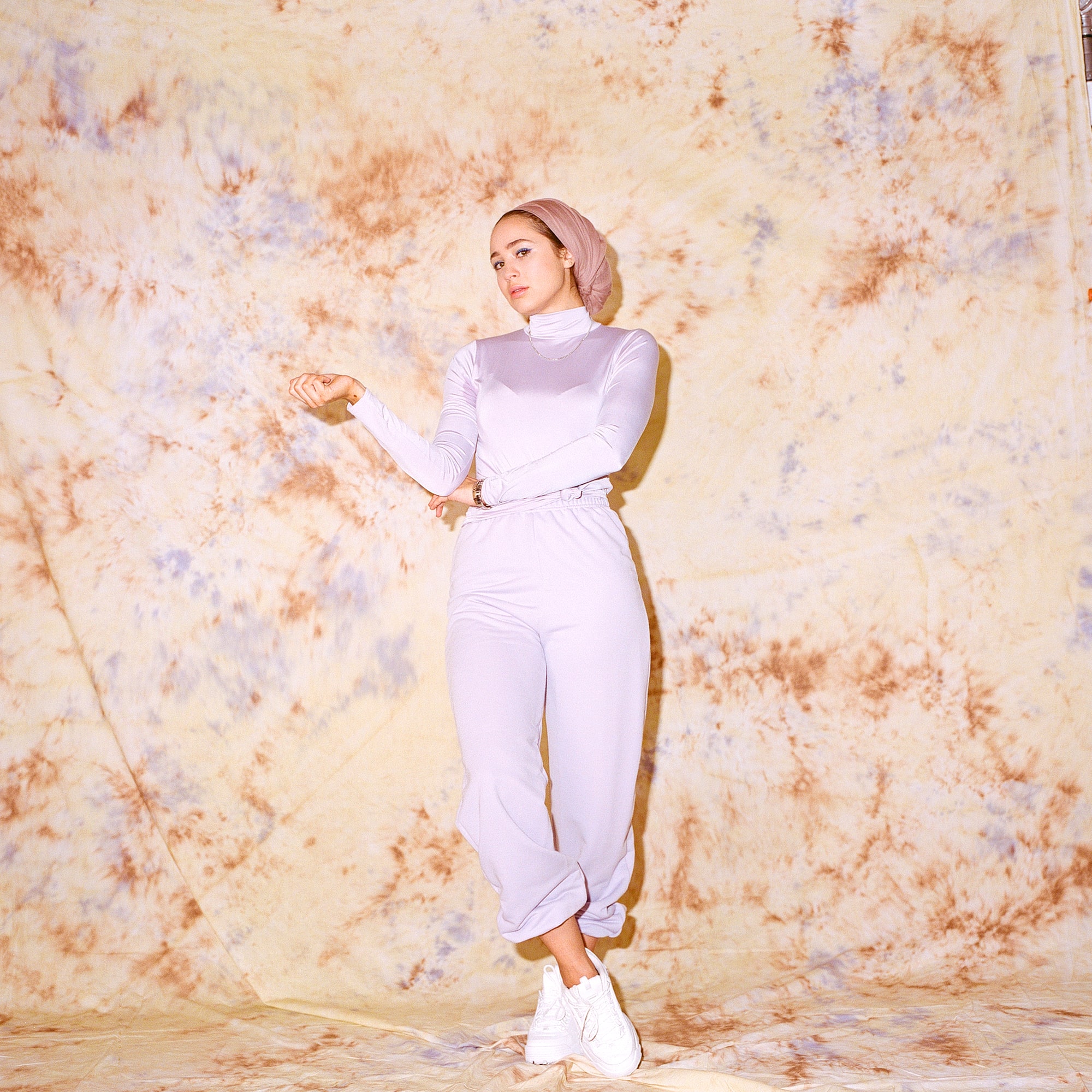 Up to My Neck Turtleneck Top, Don’t Sweat It Joggers

Why is it important now for women to support other women?

There are so many things working against women and if we’re aren’t able to support ourselves, how are we supposed to make change? I see it a lot in communities that I’m apart of, like the hijab fashion community and the modest industry. I feel like the more cool shit women do, the better it is for everybody. I hate to see people get jealous and talk negatively about each other just because they feel threatened.

Yes, we need to be done with that!

If I see a woman doing something awesome, I’m going to support them and celebrate that. I think that’s super important. If we’re being competitive and tearing each other down, it’s counterproductive. 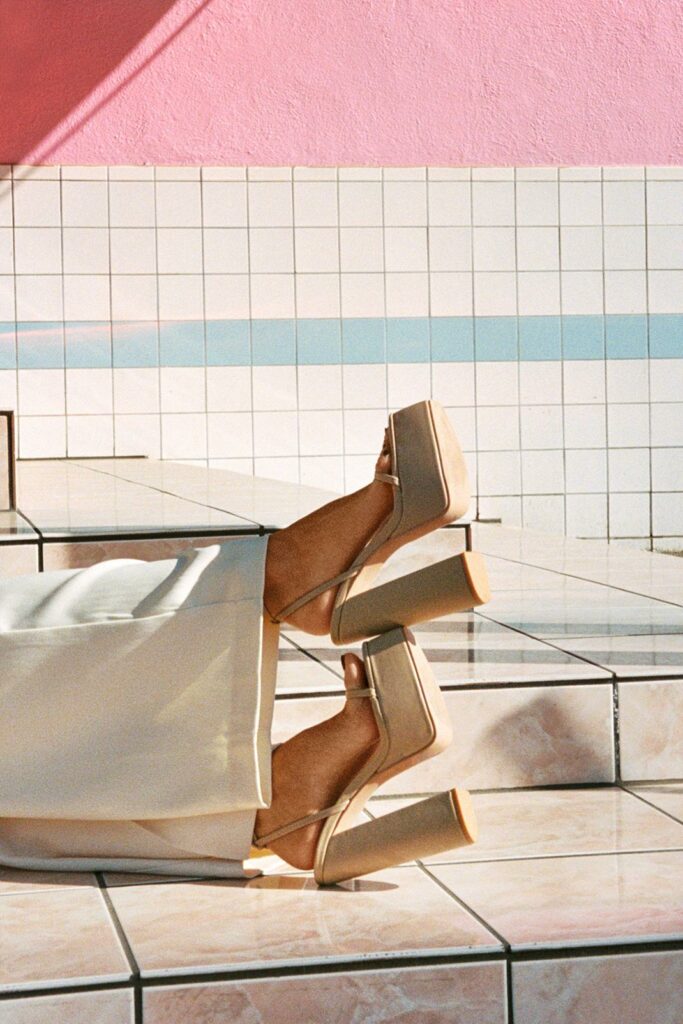 Going Out Out: Dressy Sandals for Summer 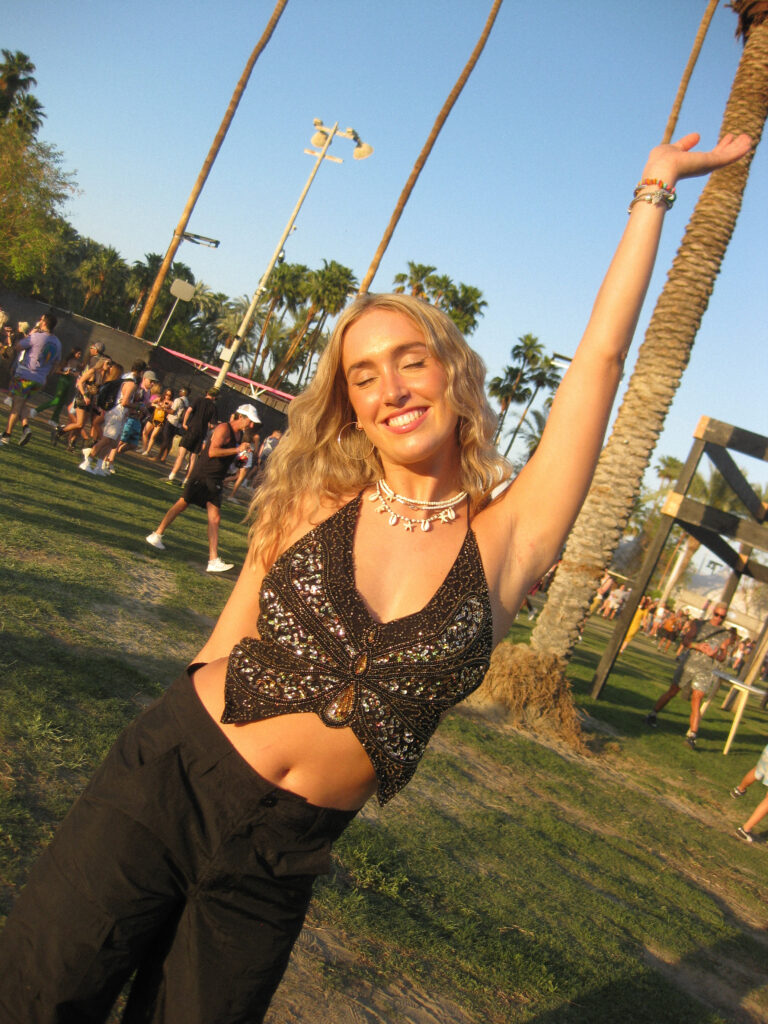 The Festival Fashion Trends of 2022 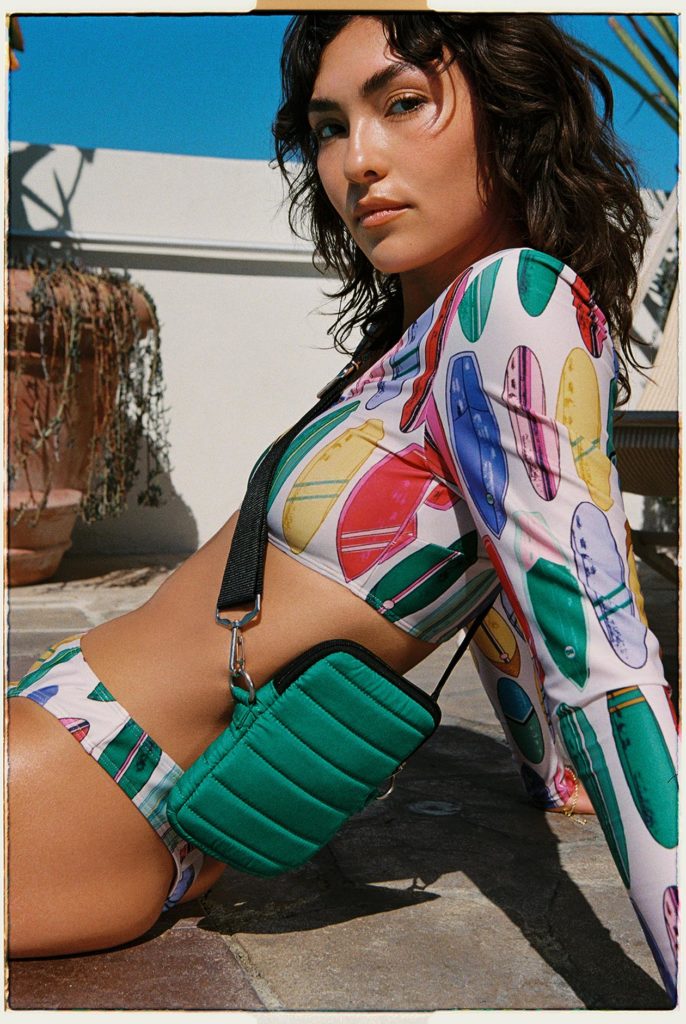